I love marble. Everything about the natural, ancient quality of its surface. The porous, timeworn signs of a material that has endured hundreds of millions of years beneath our feet. The beauty of this natural stone has enjoyed thousands of years of appreciation. Enough to clad the temples of Ancient Greece and the architectural marvels of Rome. Millions and likely billions of feet have stepped, stomped, shuffled and danced atop the Spanish Steps of Rome and the floor of  the Pantheon. 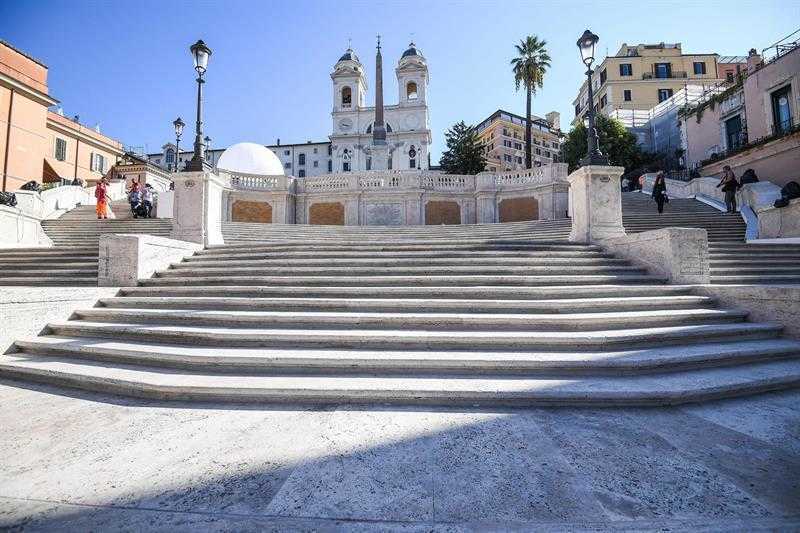 And look, it survived.

Throughout history, it weathered. From the Acropolis to Versailles to Newport’s Marble House (which was of course inspired by the Petit Trianon), the stone was used to symbolize architectural triumph and national might.

You’ll quickly learn that everyone has an opinion about the pitfalls of marble.

Because of its beauty and stature, domestic use of marble made its way into bathrooms and kitchens, first in noble palaces, but later into bourgeois homes around the world.

Then something happened. I don’t know, maybe the internet, access to information or a smear campaign by the granite, Corian, laminate and quartz industries. But the attitude changed. The scare tactics set in. Things turned dark for marble. I think maybe it was the same time “helicopter mom” entered our parlance.

I can’t discuss marble countertops with anyone without the requisite, “Don’t you know it’ll stain? It’s not that durable. You should be careful.”

Oh please. Try it, just as an experiment. You’ll quickly learn that everyone has an opinion about the pitfalls of marble.

I’m in the process of choosing travertine for a client’s kitchen island. Drop dead beautiful it’s going to be. And she’s all-in, she gets it, and with a huge eye roll to the naysayers. I love her so much.

I don’t understand this assertion or what it has to do with choosing a counter top. From what I gather, this means for all those times you’d like to break out your hammer to kickstart your woodworking project in the kitchen, you might want to think twice. It’s stone, ladies and gentleman.

Do people get a certain satisfaction pushing the limits of what’s normal wear and use? A long-time story told in my family was about (Great) Uncle George, known for being an insufferable blow-hard and grandstander. He took so much comfort in trying to demean and diminish with his arrogance that on one occasion at his home, as it’s told, he directed attention to his shiny new (expensive) glass coffee table.

“It’s so strong, you can stand on it,” he said. And he did. Feeling cavalier, he began to hop, all eyes on him as the table shattered into a million tiny pieces and he tumbled to his comeuppance. Room erupting in laughter.

Don’t jump on the countertops, ladies and gentleman.

That’s why god invented stone sealer, Stone Sealer AND STONE SEALER. And yes it works, even for stains that are left for hours or more. Though I never understood this either. Didn’t your mother teach you to clean up after yourself?

Stain = failure = shame = ridicule. And no one wants to be ridiculed for having dirty, stained countertops.

I personally am enamored by stone with a living history. We have it in our kitchen, in our baths. Heck, we frickin tiled our entire shower with mosaic Carrara. It’s fine. And my mild to severe OCD is just fine too, not having been checked into the booby hatch, yet. 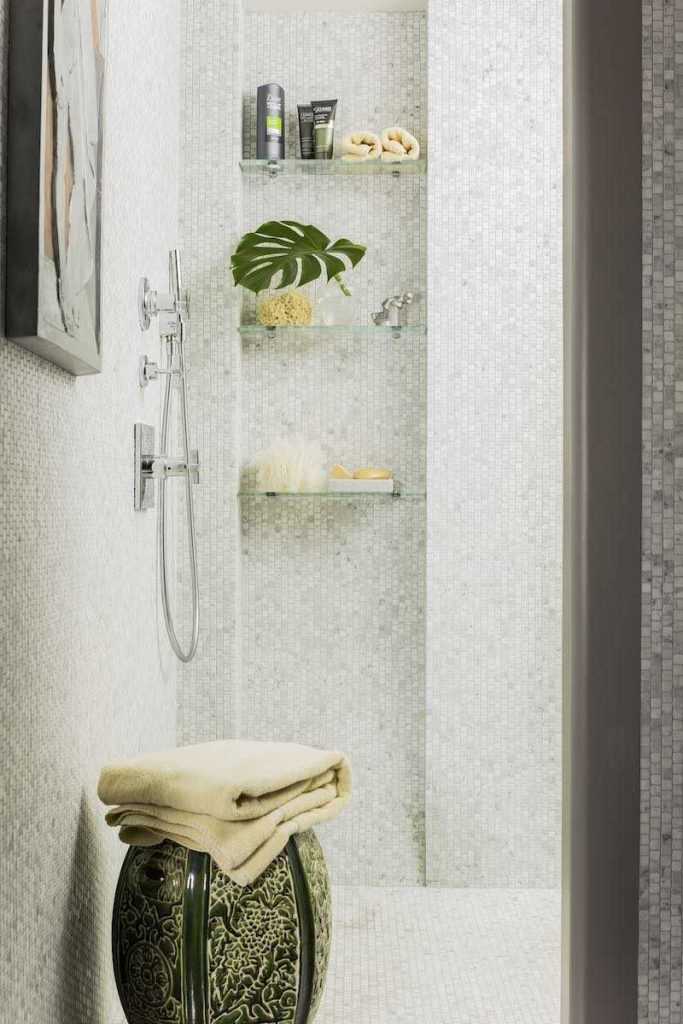 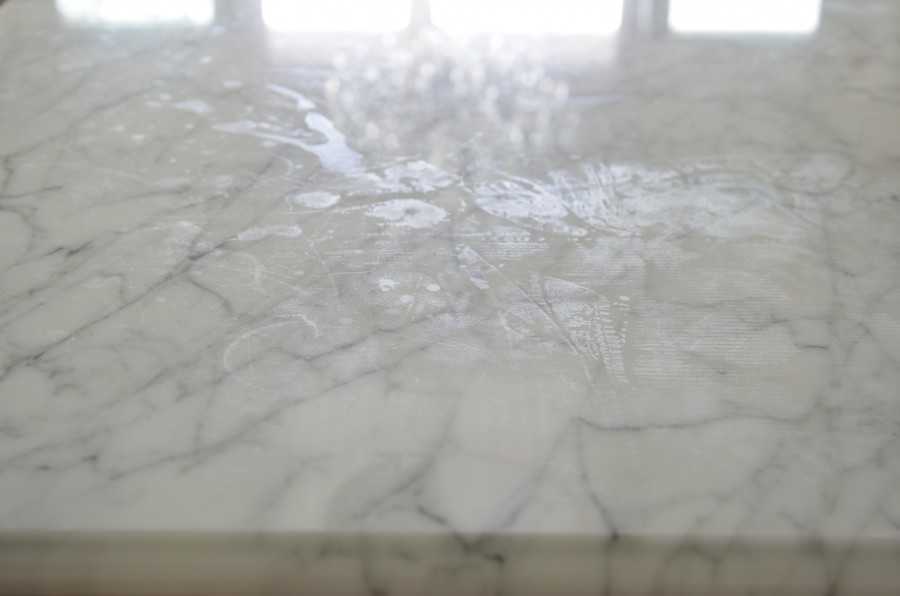 Again, the sealant, when properly used and reapplied at intervals of six months and a year beyond, will protect this catastrophe from happening. Yes, by the way, it is a catastrophe. Etches on your countertop caused by highly acidic foods like lemons, tomatoes, limes and even saline solution, with leave behind the ghost of the margarita riot that took over your kitchen the night before. 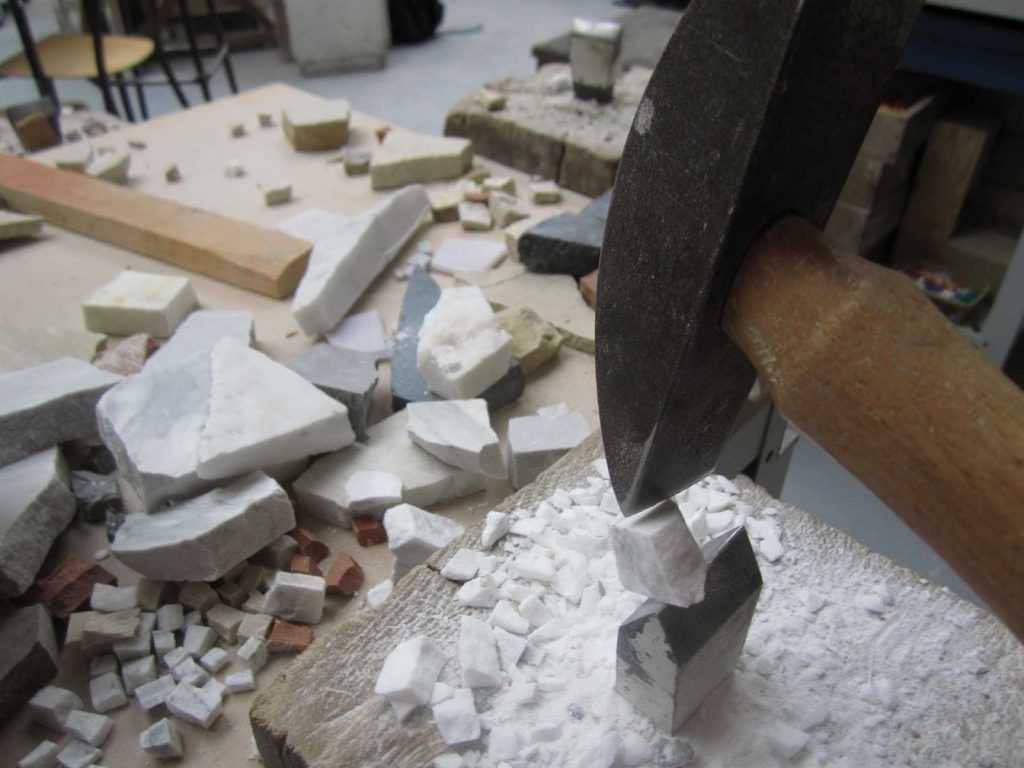 Yes, it’s rock, and if you decide to install the countertop with a narrow edge, you run the risk of, when banging say a pot against it, that it could chip. Again, this will happen with any stone you choose. So unless you are going for the wood block look (oooh nice!), then that can happen. But there’s a fix.

Using an acrylic paste and polish kit, it’s easy. We had a chip fixed rather easily on the edge of our counter, and I stopped losing sleep over it maybe just a week after it happened. Cured!

That’s why god invented trivets. For all those times I’m taking the scorching cast iron skillet out the oven, I am sure not to intentionally forgo my $2.50 macrame trivet as an opportunity to test my countertop for heat resistance.

In Conclusion (it’s in your head)

Marble does just fine by itself and is no more or less susceptible to staining than any other stone like [ burp sound ] granite. It’s how we react to stains and imperfections that gets me interested. Like many of my posts here reveal, it’s usually more a psychological reaction we have to our surroundings than the surrounding itself.

Because we all know that Stain = Failure = Shame = Ridicule. And no one wants to be ridiculed for having dirty, stained countertops. I suppose.